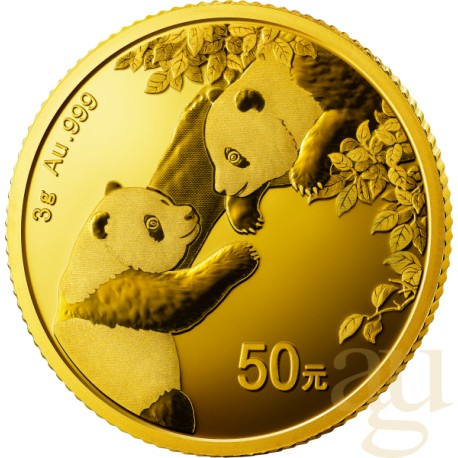 "Chinese Pandas" have become one of the main investment coins in the world coin market. They are minted from the purest 99.9% pure 24 carat gold and despite their higher price, they are popular among investors and are a very common collector's item mainly because of the annual reverse side change. The only exceptions were the 2000 and 2001 vintages, where the reverse motif is identical.

The reverse side of the coins began a new 10-year series in 2019 that takes us through the life story of a panda. Each year's motifs will depict the panda from the smallest cub to the adult.

The 2019 motif: the series opens with a newborn cub in its mother's arms.

The 2020 motif: a baby panda chewing bamboo expresses the first steps towards independence.

Motif 2021: the panda has grown up again and climbs the branches of trees under the supervision of its mother.

Motif 2022: a panda enjoys winter fun in the company of a peer. The special edition is complemented by a mintmark consisting of the numerals of the anniversary of the first minting of gold investment coins "40", which incorporates a small silhouette of a panda. The winter motif refers to the 2022 Beijing Winter Olympic Games.

The 2023 motif: the panda has reached the limit of adulthood, yet remains sociable and playful.

The obverse of the coins is traditionally unchanged and depicts the Temple of Heaven in Beijing, Chinese characters with the meaning People's Republic of China and the year of issue.

The individual motifs are complemented by the denomination, weight and purity.