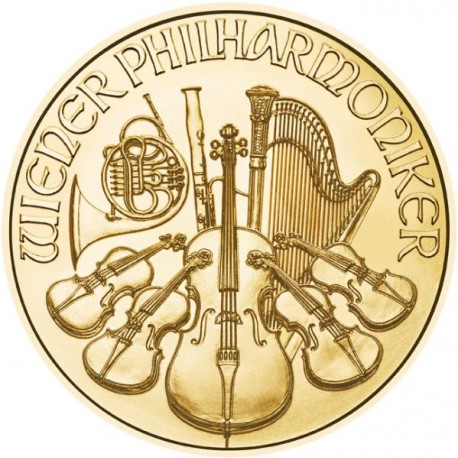 The Wiener Philharmoniker ( Vienna Philharmonic ), one of Europe's most popular investment coins, has traditionally been minted in 5 sizes and weights (1 ounce, 1/2 ounce, 1/4 ounce, 1/10 ounce and 1/25 ounce) since 1989. The Vienna Philharmonic Orchestra, which was the model for this coin, is considered one of the finest musical ensembles in the world. This coin is struck in the finest 24 karat gold, the precious metal content and weight are guaranteed by the Austrian government. The original denominations of 2000, 1000, 500 and 250 shillings were changed to 100, 50, 25, 10 and 4 Euro in 2002.

The reverse of the coin is decorated with the chosen instruments of the world-famous Vienna orchestra and the inscription "WIENER PHILHARMONIKER".

The obverse side depicts the famous organ in the golden hall of the Vienna Philharmonic. Around the organ are the inscription 'REPUBLIK ÖSTERREICH', the denomination, the size of the coin, the purity 'GOLD 999.9' and the year.

TheMünze Österreich, or Austrian Mint, is one of the world's leading mints. It mints all of Austria's circulating coins and prestigious collector coins and medals.

During the Mint's existence, a plethora of minting methods have been used. Until the 16th century, for example, the hammer was used for minting, followed by the cylinder, cradle and screw press. From 1830 to the present day, a ring press has been used for minting, which is currently capable of striking up to 750 coins per minute.

Over the years, several other mints have been established in Austria, for example in Graz, Krems, Salzburg and Innsbruck. In 1918, when the Austrian Republic began to take shape, the Vienna Mint became the main mint for Austria. And this status it still holds to this day.

Among other things, the Münze Österreich also supplies investment gold bars, which are produced for it by the Argor-Heraeus S.A. refinery, of which it also owns a quarter of the shares.