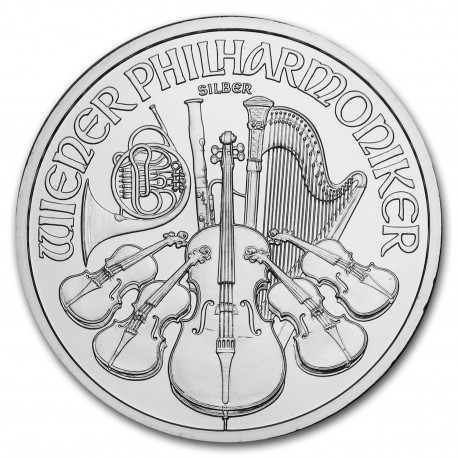 We recommend ordering whole tubes - 20pcs - you will get a better price and speed up the processing of your order.

The Wiener Philharmoniker silver investment coin minted by the Austrian Mint MÜNZE Österreich AG is clearly the most sought-after silver coin from Europe. It was minted in 2008 in high-purity 999/1000 silver and the value of the precious metal far exceeds its stated face value.

The Great Organ in the Golden Hall of the Musikverein, home of the Vienna Philharmonic. REPUBLIK ÖSTERREICH 1 UNZE FEINSILBER 1,50 EURO, year.

Instruments of the Philharmonic, WIENER PHILHARMONIKER

TheMünze Österreich, or Austrian Mint, is one of the world's leading mints. It mints all of Austria's circulating coins and prestigious collector coins and medals.

During the Mint's existence, a plethora of minting methods have been used. Until the 16th century, for example, the hammer was used for minting, followed by the cylinder, cradle and screw press. From 1830 to the present day, a ring press has been used for minting, which is currently capable of striking up to 750 coins per minute.

Over the years, several other mints have been established in Austria, for example in Graz, Krems, Salzburg and Innsbruck. In 1918, when the Austrian Republic began to take shape, the Vienna Mint became the main mint for Austria. And this status it still holds to this day.

Coins from this mint are sought after by investors and collectors all over the world. One of the most internationally recognized coins of the Austrian Mint is the Maria Theresa Taler coin. It was created in 1780, the year this empress died. It is now the most famous silver coin in the world and also the coin with the most pieces minted. Another famous coin is the gold investment coin called the Wiener Philharmoniker.

Among other things, Münze Österreich also supplies investment gold bars, which are produced for it by the Argor-Heraeus S.A. refinery, of which it also owns a quarter of the shares.